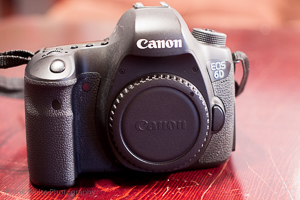 You and I have grown together. I thought I’d eventually grow old with you. We’ve been through a lot and I’d committed myself to stand by you through the years. You were so awesome. First you came out with the Canon 5D and I was blown away. The image quality from that full frame sensor was ground breaking. Even if I opted not to go with the 5D, you offered me a variety of great bodies to choose from.

There was the T2i, the T3&4i with articulating touch screens and later, the 7D, a truly amazing body. After the 5D, you introduced me to the 5D mark II and I was the envy of the pack. Everyone wanted one. The video was truly awesome. Imagine shooting video at 1080P, hell it was bold and ground-breaking. I didn’t think it could get much better but you up-d the anty and released the 5D mark III. I cried. I was so proud to have you on my arm. Again, you pushed the envelope. You showed me what a well rounded body looked like. The additional autofocus points allowed me to reach new heights and that 26MP FF sensor made my friends and colleagues green with envy. And ohh, the speed, the build quality, the (pause). I was just so damn proud to be with you Canon.

Time went on. My friends and colleagues began allowing me sneak peaks of the bodies on their arms and I gotta say they were looking good. They began showing me things like 4K video, greater dynamic range, and in some cases electronic focusing tools like focus peaking and zebras. But my aging 5D mark III, while no longer providing me a creative edge was still adequate and capable. Besides, with the 5D mark II being the original king of DSLR video, I secretly knew you, Canon, a knight in shining armor, would come through with the 5D mark IV (and 6D Mark II). Once they saw I could video in 4K using the entire FF sensor, use a fully articulating screen, and shoot between 8 and 10 frame per second in burst mode, I’ll again walk around with the best body on my arm. They would look at the dynamic range and just salivate. I waited impatiently for the 5DM4. No worries though. I knew you’d give me the body I desired and the wait would be worth it. You’d already given me the best auto-focusing system know to man, in a DSLR camera body. You’d already learned that although the flagship 1D Mark II is a awesome camera we found the dynamic range underwhelming. And you were seeing an exodus to Nikon for its dynamic range. Sony and other mirror-less camera makers ; I’m not going to mention Fuji, Olympus, Panasonic, and Pentax by name. Surely the 5D mark IV would reverse this trend. I’m mean we both know that more professional photographers shoot Canon than those other guys and many of us consider you the Apple of professional DSLR, but Canon I’m disappointed in the 5D mark IV.

Don’t get me wrong. The 5D mark IV is a great camera. There is some improvement in dynamic range, it’s burst mode is a little faster, it does shoot 4K with caveats and it’s auto-focusing system is still 2nd to none. But, Canon, it’s not the leap from the 5D to the 5DM2, or the leap from the 5DM2 to the 5DM3. Your covenant dual pixel raw seems to me to be more marketing than useful. Yes, it’s a nice camera although, most of us would rather buy another company’s body for video. Some of us are opting for mirror-less features found on other company’s bodies. (I get that mirror-less and optical digital cameras are apples to oranges but you see some of the features we want.) Some of us are leaving for other company’s bodies with higher dynamic range. So! Canon, I find myself conflicted. I made a commitment to you in this relationship and I’d plan to walk proudly with you into my twilight years. But I don’t know if I can wait another 4 years or so to catch up. I’m sooo conflicted and torn. I don’t want to leave you, Canon.

Promise me that if I wait for you it’ll be worth it. Promise me the next leap will be all I desire and more and will come sooner than 4 years. Promise me that when I walk down the aisle with you on my arm I’ll once again beam with pride while others look at you wantingly and longingly. Canon, I’m going to stay for now, but forgive me if I stray.

Shoot 'em with a Canon!

If you are going to shoot anyone today, Shoot 'em with a Canon! or a camera of your choice.

Like the photos I made? A great way to honor me and to let others know is by reviewing me.

Leave Me a Review: